We have developed a method to adapt surface related multiple elimination (SRME) to land data, which accounts for the near surface by including differential static corrections during the prediction phase. We call this surface corrected multiple elimination (SCME). An advantage of SCME method, as for SRME, is that multiple predictions are data driven and they do not rely on velocity differences to identify multiples. As shown in a heavy oil example in Figure 1, SCME attenuates the small moveout multiple and leaves the primaries relatively untouched. 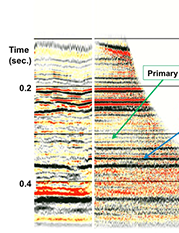 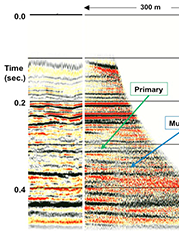 Figure 1. No Demultiple, Radon and SCME applied to 3D data acquired over a heavy oil reservoir. On the left are migrated data and a superbinned gather is shown on the right. Data are provided by OSUM Oil Sands Corp.

This is illustrated in Figure 2, which shows a stacked section, at a flat processing datum, taken from a 3D seismic dataset acquired over a heavy-oil reservoir. The multiple generating reflector is shown as the yellow horizon. The green line at the top represents zero time, as measured from the surface. Based upon a simple approach using just the zero offset times, we double the time between the surface and the horizon to predict a multiple, as shown by the red horizon. This tracks an event on the data that we believe is a multiple. 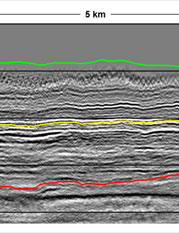 Figure 2. Identification of a free surface multiple on CMP stacked data from a heavy oil survey. The multiple (red horizon) results from a bounce between the multiple generator (yellow) and the surface (green).

Figure 3 shows the application of SCME to data from a 3D seismic dataset acquired over a heavy-oil reservoir (data provided by OSUM Oil Sands Corp). The multiples present in the data, indicated by the arrow, are problematic because they stack in with very similar velocities to the primaries, and are not easily removed by velocity based methods such as radon (as shown in Figure 1). The multiples could have given rise to erroneous interpretation of the data if not identified. SCME has been successful in attenuating these multiples resulting in a more interpretable seismic section. 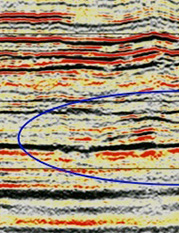 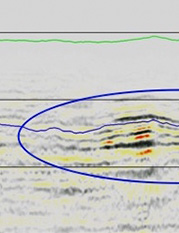 Figure 3. Stack of 3D inline with no multiple attenuation, after SCME and the difference. The blue ellipse highlights the location of the free surface multiple.