Most acquisition geometries have regularly spaced source lines and receiver lines. This regular spacing (or sampling) can lead to periodic amplitude striping that mimics the source line and receiver line intervals. This periodic amplitude striping is called an “Acquisition Footprint”. Surface consistent shot and receiver scaling cannot compensate for this amplitude banding, as it is a function of the offset distribution. The amplitude banding can be subtle when viewed in a section view, but is more detectable when viewing the data in a time slice or horizon slice domains. Key Seismic uses a proprietary program called TSKK which first transforms time slices into the kx-ky domain. Once in the kx-ky domain, the amplitude banding appears as localized peaks or spikes. The program determines the localized amplitude peaks over a limited range of inlines, crosslines and time windows, then suppresses the amplitudes based on a scaled value of the neighbouring amplitudes. Since a subset range of inlines and crosslines are used to determine the amplitude footprint, the kx-ky filter is adaptive in both time and space. This is especially useful when dealing with a 3D merge, where the acquisition geometries may vary. Footprint attenuation can be applied post stack, or on single fold pre-stack data such as Common Offset Vectors (COV) or offset planes. 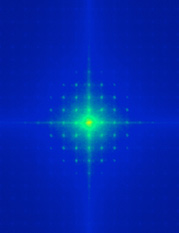 Figure 1. The kx-ky transform of a time slice. Most of the primary energy is concentrated at the centre of the transform (kx = ky =0).

Figure 2. The same kx-ky transform as in Figure 1, but now the detected spikes in the transform are shown as yellow dots. 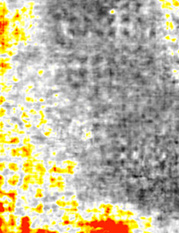 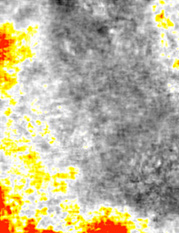 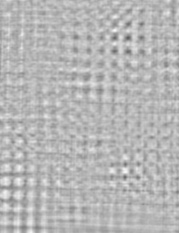