Simultaneous source acquisition leads to overlapping records, or interference, that must be removed prior to subsequent processing. While conventional noise attenuation methods can partially attenuate simultaneous source interference by estimating the underlying signal, inversion based deblending offers the ability to jointly estimate the signal and interference.

The goal of inversion based deblending is to find unblended shot records that match the observed data when passed to a blending operator. This can be expressed by

where d are the observed data, Γ is a blending operator, and m are the unblended data. Because Γ compresses the data into a blended format, solving for m is an ill-posed inverse problem that requires additional constraints. To overcome this obstacle we require the solution to be laterally coherent and free from erratic amplitudes. These constraints exploit the incoherence of relative shooting times between adjacent traces to suppress interference. 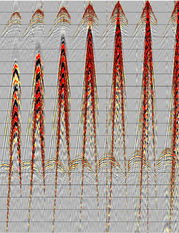 Figure 1. A common shot gather from a simultaneous source survey. The interference appears coherent in this domain. 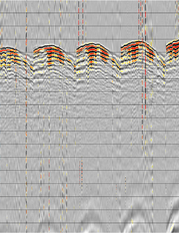 Figure 2. A common receiver gather from a simultaneous source survey. The interference appears incoherent in this domain.

Figure 3a shows the colour coded shot times for a simultaneous source survey. Sources with similar shot times can potentially interfere with each other. Another way to visualize this interference is via the blend fold, calculated as the number of shots that occur within a specified time window surrounding each shot. Figure 3b shows the blend fold for this survey calculated on a +/- 5 second window. Many shots in the survey have a blend fold of one (no interference), while relatively few have a blend fold of three or higher. 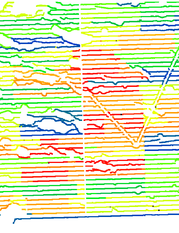 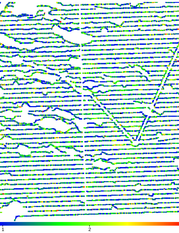 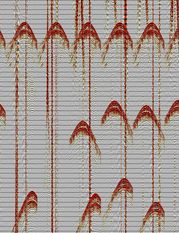 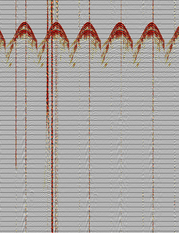 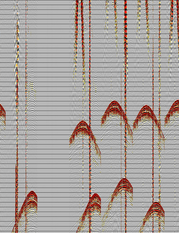