We have developed a model-based water-layer demultiple (MWD) technique specifically designed to attenuate multiples in shallow water. This technique is similar to Surface Related Multiple Elimination (SRME) which has become the de facto standard for marine demultiple. SRME predicts multiples by convolving the data with successive estimates of the primaries in a recursive estimation procedure. It is very effective for both 2D and 3D multiple attenuation, in moderate to deep water. However, SRME can struggle with shallow water multiples, especially in the presence of a hard water bottom. In shallow water, the water-layer multiples can be recorded with significant amplitudes up to high orders, where the order of a multiple refers to the number of downward bounces from the sea surface. The high order water-layer multiples often overlap peg-leg multiples from deeper events. The subsequent adaptive subtraction must simultaneously match all orders of multiples and this often leads to poor multiple attenuation results. 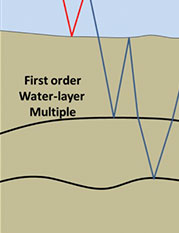 To describe this in more detail we will examine shot-side multiple removal. Similar to SRME, the MWD method relies upon cross-convolution, in this case cross-convolution of the water-bottom Green’s function with the data. The water bottom Green's function was represented by the red raypath in Figure 2. The Green’s function used is the wavefield recorded at various points on the surface due to an impulse generated at the shot, with reflection from only the water bottom.

Given any input trace with shot position S and receiver position R, the water-layer multiples are then predicted by convolving the Green’s function from shot position S and receiver position X with the data from shot position X and receiver position R, where X is the downward reflection point (DRP) for the multiple. This is repeated for all sensible positions of X (based on aperture considerations), and the results are summed to produce our multiple estimate. This is illustrated for two such DRPs, X1 and X2, in Figure 3. Note that in Figure 3, position X2 would correspond to a non-specular downward reflection for this relatively flat geology. However, this cannot be known a priori, and it might correspond to a specular reflection for some other dipping reflector. The MWD method relies on Fermat’s principle, such that the summation will naturally select the specular events by constructive interference and remove others by destructive interference. 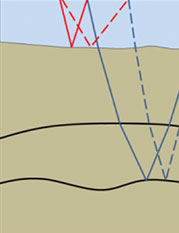 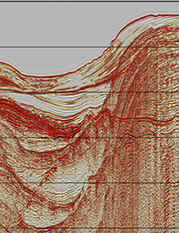 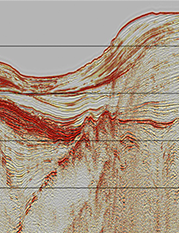